December sees the start of the festive holiday season in Amsterdam – with presents given out on Sinterklaas and then the run-up to Christmas and New Year. Let’s take a look at what’s on in the city for visitors, locals and expats in December 2021…

The Dutch Government continues bringing in ‘precautionary’ measures to contain the ‘coronavirus’. Some events are cancelled [X] or may be cancelled/rescheduled at short notice with limits on capacity.

Museums in the Netherlands are closed until at least 25 May 2021. Once open again visitors need to buy a ticket (and time-slot) online in advance, masks are mandatory.

For a comprehensive selection of museums, activities and tours in Amsterdam book here

Hermitage Amsterdam – Showcases an exhibition every 6 months from the vast collection of the grand State Hermitage in St Petersburg, Russia.

Also ongoing at the Hermitage: Panorama Amsterdam. City Time Lapse, a visual projection of Amsterdam through the ages as seen from the Amstel river; and Portrait Gallery of the 17th Century.

Museum of the Mind (Outsider Art) – This museum at the Hermitage showcases extraordinary art by unconventional artists who have not been formally trained.

Body Worlds – Display of human body plastinate specimens at the permanent venue on Damrak. The exhibition focuses on happiness.

Sport in Amsterdam and Netherlands

Amsterdam Light Festival – Celebrating its 10th year, this year’s event (theme: Celebrate Light) will show 20 of the most popular past installations. Expected to run 2 Dec 2021 to 23 Jan 2022.

Boom Chicago – Comedy and improv shows in English playing at Rozentheater on Rozengracht.

Internationaal Theater Amsterdam (ITA) – Amsterdam’s renowned theatre company performs shows in Dutch which have live English surtitles above the stage – for Thursday night shows at the Stadsschouwburg theatre. Note, many shows have been cancelled in December.

Dutch National Opera & Ballet – Productions for 2021/22 season to be announced.

Holiday Season in Amsterdam and Netherlands

Sinterklaas (St Nicholas, patron saint of Amsterdam) is celebrated in the Netherlands on December 5th. In mid-November, Dutch TV shows him “arriving” by steamboat from Spain dressed in a red bishop’s robe and carrying a pastoral staff. Sinterklaas then parades through town on a horse accompanied by his helpers, the Zwarte Pieten (black Petes). 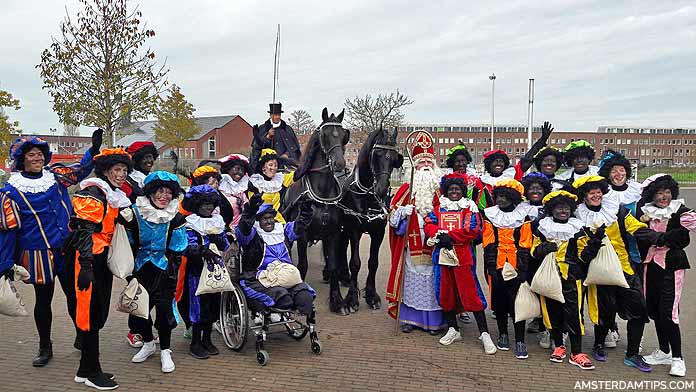 In the last few years there has been a growing controversy and debate about the depiction of the black Petes due to perceived racial/colonial overtones. Although many Dutch support the character, subtle changes in appearance are being made such as creating the chimney-soot Petes (Schoorsteenpieten).

Dutch children put out a shoe next to the fireplace and receive small presents such as pepernoten spiced biscuits or chocolate letters (with the initial of their first name). If you are invited to a Dutch Sinterklaas party you will probably have to buy a present for at least one of the guests and perhaps write a personal poem to accompany the gift!

New Year’s Eve 2021/22 –  This year looks again to be a more subdued affair with ‘coronavirus’ restrictions in place and a likely ban on fireworks.

Holiday On Ice Supernova – Popular family show on ice to be held at RAI Amsterdam 23-27 Dec 2021.

Other Events in Amsterdam and Netherlands

Ice*Amsterdam – Get your skates on and hit the spectacular ice rink on Museumplein in the shadow of the Rijksmuseum. Expected to return for winter season 2021/22.

At this point, it is unclear whether the following events can go ahead.

Museum Market – Museumplein hosts this Sunday market with arts and crafts, food and music. Date to be confirmed.

You should book your Amsterdam accommodation in advance if possible. During popular events rooms can be difficult to find and prices can rise significantly! Book your Amsterdam hotel here via Booking.com, which usefully offers free cancellation if your plans change.

• For those on a budget check out Conscious Hotel Vondelpark, The Student Hotel, Volkshotel, Jaz Amsterdam (close to Ziggo Dome/ArenA) and Motel One.

What’s On in Amsterdam February 2021

What’s On in Amsterdam September 2021