Foodhallen is a compact indoor food court located in a former tram depot in Amsterdam West, near the Ten Kate street market. Opened in October 2014, it was loosely inspired by international food markets such as London’s Borough Market and Madrid’s Mercado de San Miguel.

Foodhallen Amsterdam contains a central bar plus around 20 different stands from local food businesses/entrepreneurs.  There are a reasonable number of seats and benches around to enjoy your food – although it can get very busy, especially at weekends.

It is not on the same scale as Rotterdam’s Markthal. Foodhallen also has a 12-stall food court in Rotterdam as well.

The flavour at Foodhallen Amsterdam is both local and international. Stall highlights currently include: 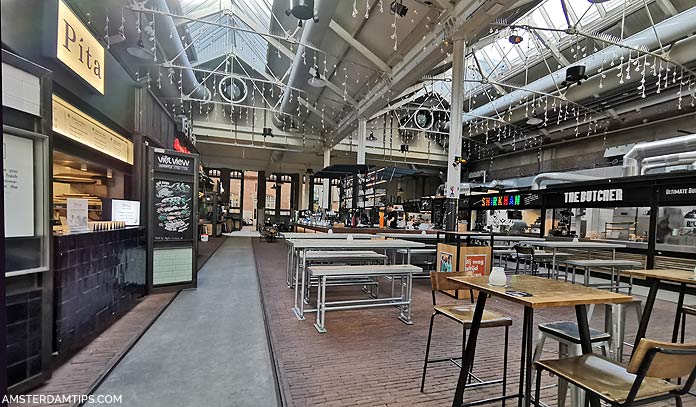 The De Hallen building dates from the 19th century and has been renovated in a modern industrial chic style with lots of exposed brickwork.

The complex also contains Hotel De Hallen and its bistro-restaurant Remise47, TV studios, FilmHallen (a 9 screen cinema), a small public library (OBA) with café and a few shops/boutiques. Outside can be found the Ten Kate street market. 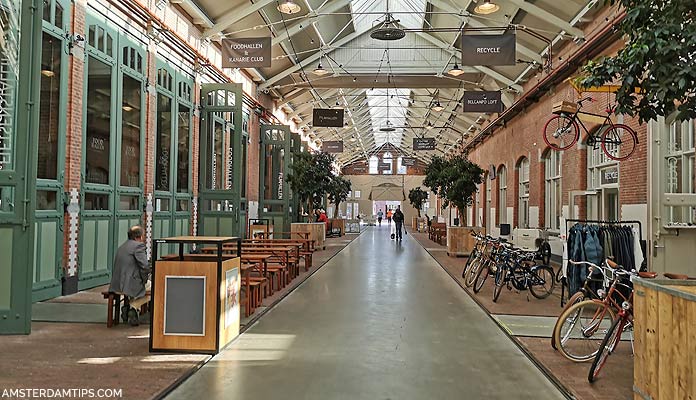 Foodhallen is a welcome addition to the Amsterdam food scene. Reviews have been mainly positive although some visitors have complained about a lack of ventilation and the relatively high prices for some of the dishes.

If you are passionate foodie and enjoy eating on informal communal tables then it is probably worth a visit. There is live music on some evenings.

One issue we do have is that many stall holders will only take card payments, no cash is accepted. This policy is seen in a number of other places around town including Marqt, Vlaamsch Broodhuys and EYE Film.

Many international card providers charge hefty usage fees per transaction, making it uneconomic for foreign visitors to use such cards for small amounts. On the other hand, some people just prefer the old-fashioned anonymity and reliability of a cash transaction.

We understand the hygiene issue of handling cash so we would like to see an Asian-style central cash desk available for payments which would be more friendly to international customers. 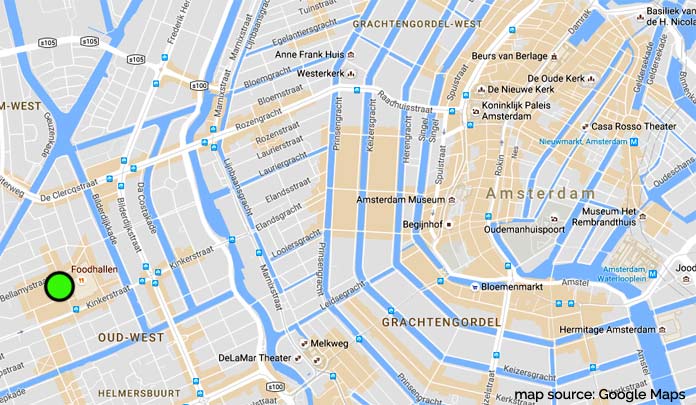 To reach Foodhallen you can either walk from the city centre (about 15-20 mins) or take tram 17 from Central Station or tram 7 from Leidseplein to the “Ten Katestraat” stop. You can enter the Foodhallen via Bellamyplein or the De Hallen passageway via Ten Katestraat or Tollensstraat.

Organic Restaurants and Cafés in Amsterdam