Looking for travel options between Eindhoven Airport and Amsterdam? The city of Eindhoven lies around 100km south of Amsterdam in the province of North Brabant. Eindhoven airport itself is located 7km to the west of Eindhoven city centre.


A number of visitors coming to Amsterdam choose to arrive at Eindhoven airport (EIN), taking advantage of cheap flights from no-frills airlines such as Ryanair, Transavia and Wizzair.

In this article we provide a detailed guide to transport from Eindhoven Airport to Amsterdam.

2. TAXI: Eindhoven airport taxi rates to Eindhoven Central station €25; to Amsterdam from around €150 (fixed rate) or higher for meter fares. Book a taxi at fixed rate with Sneleentaxi

You can take the regular local bus from Eindhoven Airport to Eindhoven Central station and then an Intercity train to Amsterdam Central.

Local bus: From Eindhoven airport you take bus 400 or 401 (operated by Bravo Direct) both of which go to the bus terminus at Eindhoven Central NS railway station. The airport bus stop is a short walk from the arrivals terminal. An electronic board at the bus stop will tell you the time of the next departure.

The journey time from the airport to Eindhoven Central station is about 25 minutes. The buses run every day until midnight – on weekdays the service starts at around 0600, on Saturdays 0700 and Sundays 0800. The service frequency varies through the day running up to 6x an hour at peak times to 4x an hour in the late evenings.

There is some space for luggage marked under the seats and near some doorways.

The standard single fare on the bus between Eindhoven Airport and Eindhoven Central station costs €4.80. You can buy this from the driver, the Mobility Point desk in the terminal or from the vending machines near the bus stop. Payments are accepted with card only (cash not accepted).

If you have an anonymous OV-chipkaart (public transport smart card) you can instead travel using credit which will work out a bit cheaper than the standard fare. However since the card costs €7.50 to buy we suggest most visitors just stick with the standard fare ticket.

The OVpay system where you can use a contactless debit/credit card to check-in /out is being rolled out in the Netherlands in 2023. This will effectively make the OV-chipkaart redundant for some visitors.

Note, there is a NS Dutch Railways yellow and blue ticket machine just outside the arrivals in the main hall of Eindhoven airport. You can buy a combined bus+train ticket from Eindhoven Airport to Amsterdam (or wherever your destination is in the Netherlands). The machine accepts debit and credit cards plus Euro coins (no notes) – click for English if required.

The bus+train ticket total price (€28.50) includes the €4.80 Bravo bus fare plus the €22.70 NS train fare component and a €1 surcharge for a disposable ticket. If taking the bus and train we recommend buying your combined ticket at the machine – this saves time buying separate bus and train tickets. It is not yet possible to buy a combined fare online.

Children 0-3 always travel free in the Netherlands. Each valid ticket holder on the Bravo local bus can take up to 2 children 4-11 for free. In addition children 4-11 can purchase a Railrunner ticket for €2.50 for 1 day’s travel on the Dutch rail network.

A child aged 4-11 would therefore pay a bargain €2.50 to get from Eindhoven Airport to Amsterdam.

Standard bus and train tickets are disposable OV-chip cards and you need to check-in and check-out of your journey using the card readers on the bus and when you get to the gate barriers at Eindhoven and Amsterdam stations.

Intercity train: At the bus terminus walk straight into the adjacent Eindhoven Central NS station. If you have a combined ticket then go through the gate barriers to head to the platform tunnel.

If requiring a train ticket, the standard fare from Eindhoven Central to Amsterdam Central costs €22.70 (2nd class) or €38.59 (1st class) – plus €1 surcharge if buying a disposable ticket.

You can buy train tickets at either the OV Service & Tickets desk or at the yellow and blue ticket machines at either end of the station.

For more detailed info and tips on train tickets please check our How To Buy A Dutch Train Ticket Guide.

Once checked-in through the gate barriers you can take the Intercity train to Amsterdam Central (direction Alkmaar or Enkhuizen) which normally depart from platform 4, 5 or 6.

The service runs up to 4x hourly and the trip takes about 1 hour and 18 minutes. The train stops at Den Bosch, Utrecht and Amsterdam Amstel before arriving at Amsterdam Central station.

The first service departs around 0530 (weekdays), 0700 (Sat) and 0730 (Sun). The last train leaves Eindhoven at around 2330 although there are hourly (slower) night trains running on Friday and Saturday nights. Printed yellow timetable boards can be found at the station or check the ns.nl website.

Be aware that the NS double decker Intercity trains on the route are not very convenient if you are carrying large suitcases – to reach the carriage you have to navigate stairs and the overhead racks are tiny! However you can find storage space on the floor between some opposing seats. Alternatively, just stay in the compartment near the doors – but don’t leave your luggage unattended.

For travel from Eindhoven to Amsterdam Schiphol airport there is a separate half-hourly direct service available during the day. It stops at Den Bosch, Utrecht, Amsterdam Bijlmer ArenA and Amsterdam Zuid – it does not go to Amsterdam Central.

One thing to watch out for is that engineering maintenance work at weekends can occasionally close part of the Eindhoven-Den Bosch-Utrecht-Amsterdam rail line.

This means replacement bus services running between the affected stations – if you are carrying luggage this can be quite a hassle, as well as delaying your journey by 30 to 60 minutes.

Amsterdam Central is the transport hub of Amsterdam – see Amsterdam transport ticket options for more about getting around the city.

For taxis, the taxi rank is just outside Eindhoven station on the city side (opposite end to the bus terminal). Book a taxi at fixed rate with Sneleentaxi

Amsterdam to Eindhoven return trip by train+bus: Just do everything above in reverse. The first train leaving Amsterdam to Eindhoven is at around 0600 (weekdays), 0700 (Sat) and 0800 (Sun) though hourly night trains run on Fridays and Saturdays. Then take the 400/401 bus back to the airport. You can buy a combined ticket at Amsterdam Central station.

Travelling from Eindhoven to other destinations in the Netherlands? Direct intercity trains can get you to Breda, Den Haag, Maastricht, Rotterdam, Tilburg and Venlo.

RENTAL CARS: If you need to hire a car from Eindhoven, you can book with Discover Cars here which checks all the main sites.

Eindhoven airport is the 2nd busiest airport in the Netherlands after Amsterdam Schiphol. The modern single terminal has 2 levels – the upper level has a La Place café and a panorama terrace overlooking the apron and runway.

The lower level has airline desks, departures and arrivals plus a few shops including an AH To Go mini-supermarket, GWK-Travelex money shop, AKO newsagents and Starbucks café.

There is a Tulip Inn hotel at Eindhoven Airport located directly above the airport terminal. With rates from about €85 and free WiFi, this is a very convenient option for Eindhoven flyers. To book the Tulip Inn please click here

Airlines serving Eindhoven: Ryanair flies from Eindhoven airport to a wide variety of destinations around Europe. WizzAir has flights to EIN from various airports in Poland and Eastern Europe. Dutch airline Transavia serves a number of Mediterranean destinations. A few other airlines run flights to Turkey.

There are plans to add a NS train station at Eindhoven Airport in the coming years which will make things more convenient for passengers.

This article was first published in 2008 and has been continuously updated since then. Last update 21 December 2022. 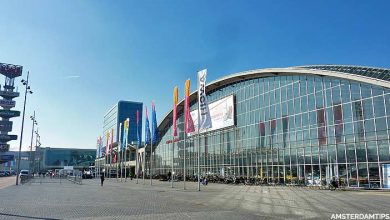 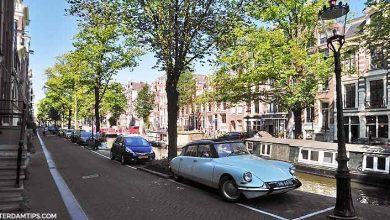 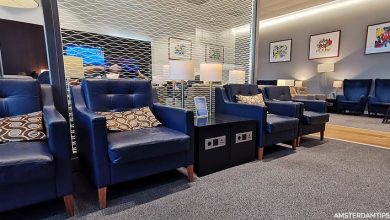 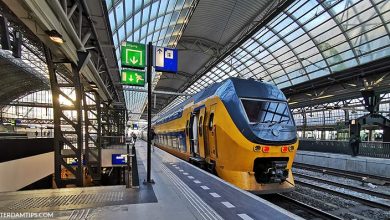