A pleasant half-day trip from Amsterdam is a visit to the picturesque Dutch village park at Zaanse Schans, approximately 15km north of the city. You will find iconic views of the 6 windmills set on the river Zaan, traditional houses, shops and museums.

Zaanse Schans has an open-air museum feel and has become a very popular tourist attraction with 2.5 million annual visitors. It is free to just walk around and take photos.

The Zaanse Schans area was actually set-up in 1963 as a reserve for historic buildings from the region. The buildings were transported here by land and water to be restored.

The Zaan region is well-known for its green houses. It is thought that the green paint made of copper pigment had good weatherproofing qualities.

The Zaans Museum is a principal attraction at Zaanse Schans and gives a concise historical overview of the people and industry of the area.

It has a varied collection of paintings, costumes, furniture as well as multimedia exhibits.

The museum also houses the Verkade Experience which is a history of the chocolate and biscuit maker including the old manufacturing machines which you can see in action.

The Weaver’s House (Zeilenmakerspad 8) shows how sails were traditionally made using looms.

The Tiemstra Cooperage (De Kwakels 2) will show you the craft of making wooden barrels which were vital for transporting goods.

If you just wish to visit the Weaver’s House and Cooperage, then admission to either costs €3 for adults, €1.50 for children 4-17.

There is a large car park at Zaans Museum which is where most of the coach tours arrive.

Not far from the Zaans Museum is a 2-level wooden watchtower (free entry) which gives an elevated panoramic view of the area.

Other museums/attractions at Zaanse Schans

The Albert Heijn Museum Shop (Kalverringdijk 5) is a reconstruction of the first ever Albert Heijn store from Oostzaan dating back to the late 19th century. Today Albert Heijn is the biggest supermarket in Amsterdam and the rest of the Netherlands. Entrance is free, open 1000-1630 weekends only.

The Zaanse Time Museum (Kalverringdijk 3, daily 1100-1600) shows the history of Dutch timepieces with a collection of clocks that chime together on the hour. Standard entrance is €11 for adults, €5.50 for children 4-17. Free entrance for Iamsterdam City Card and Museumkaart.

The Bakery Museum de Gecroonde Duyvekater (Zeilenmakerspad 4, daily 0900-1700) is where you can sample the Duivekater, a famous Zaanse sweet bread. Free entrance.

Honig Breethuis (Lagedijk 80, Fri-Sun 1300-1600) is a 19th century merchant family house on the west-side of the Zaan. Entrance is €7.50 for adults, free for Museumkaart holders.

Ever wondered how the ubiquitous Dutch clogs are made? The Clog Workshop (Kraaienest 4, daily 0900-1700 Nov-Feb/0900-1800 Mar-Oct) gives you the chance to see a clog maker in action. Entrance is free and the onsite museum houses an impressive collection of wooden shoes.

World of Windmills at Zaanse Schans

Zaanse Schans is famous for its wooden windmills. The old industrial area of the Zaanstreek once featured more than 1,000 windmills.

The World of Windmills opened in 2020 and includes the Mill Museum and the chance to visit a number of working windmills.

The Mill Museum (Kalverringdijk 30, open 1200-1700 Tue-Sun) houses an interactive exhibition about various aspects of mill life, culture and trade. The highlight is perhaps an 11 metre wide panoramic painting of the windmills in Zaandam around the year 1800.

You have the choice to visit the following windmills:

These other windmills at Zaanse Schans may have restricted opening hours or may be closed:

There is a Zaanse Schans card available for purchase (€23.50, children 4-17 €16) which offers entry into the Zaans Museum, Zaanse Time Museum, the Weaver’s House and Cooperage. You can also visit the Mill Museum, paint mill De Kat and saw mill ‘t Jonge Schaap. The card saves about €18 when taking account of all entrance fees. Buy the Zaanse Schans card here

Getting to Zaanse Schans from Amsterdam

There are a number of possibilities for getting to Zaanse Schans from Amsterdam.

In terms of public transport, there are 2 choices for reaching Zaanse Schans.

TRAIN: Take one of the NS Sprinter stopping trains from Amsterdam Central (direction Uitgeest, up to 4x hourly) to station Zaandijk Zaanse Schans.

From there it’s about 10-15 minutes walk to Zaanse Schans – just follow the signs. Walk up the road (Stationstraat) and then turn left towards the windmill and then right to cross over the bridge.

BUS: Connexxion’s Industrial Heritage bus line (391) runs from the bus station (IJ-side) at Amsterdam Central to Zaandam and the Zaanse Schans windmills. It runs up to 4x hourly and the trip takes about 40 minutes.

The Zaanstreek Bus Day Ticket costs €11.50 and is valid on all Connexxion services in the Zaandam/Zaanstreek area including the 391 trip to/from Amsterdam. A 90 minute “Bus Tram Metro” ticket costs €6.50.

A day return (2023) on the train costs €7.40 and the trip takes just under 20 mins. There is a €1 surcharge for disposable tickets. Book train e-tickets at the NS (Dutch Railways) site here – with an e-ticket you can also make a stopover at Zaandam.

It is well worth getting out of Amsterdam to have a look around Zaanse Schans, a picture postcard version of a traditional Dutch village in a water and country setting.

This article was originally published in 2011. Last updated 3 January 2023. 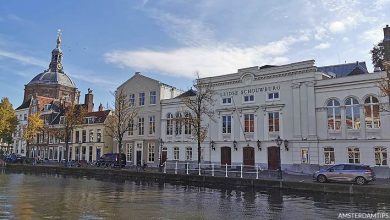 A Guide to Leiden, Netherlands 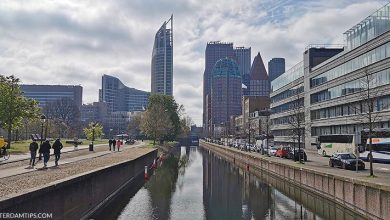 A Guide to Den Haag, Netherlands 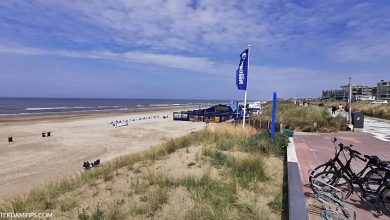 January 6, 2023
Social
About Us
Welcome! Since 2007, AmsterdamTips.com has been bringing up-to-date insider guides to Amsterdam, Netherlands from local experts - helping you to get more from your stay.
Categories
Back to top button
Close