Dublin is the capital of Ireland and a popular destination for tourists, located around 750km from Amsterdam.

Let’s look at the options for travel between Amsterdam and Dublin by air plus combinations of ferry and train or bus. Note that there have been some significant changes to service frequencies due to the ‘coronavirus’ measures.

Flying is by far the easiest and quickest way to travel between the 2 cities. Scheduled flight time between Amsterdam Schiphol (AMS) and Dublin Airport (DUB) is around 1 hour 40 minutes.

Dutch airline KLM (Skyteam) flies 2-4x daily using a mix of Boeing 737s (KLM) and Embraer 190s (KLM Cityhopper). The cheapest return flights start at around €110 – these are base fares and do not include optional extras such as checked luggage.

It is possible to travel from Amsterdam to Dublin by a combination of rail and ferry with the journey split into 2 parts via London.

[1] The first is to travel from Amsterdam to London by train – there is a direct Eurostar train 2x daily (running from 26 October 2020). This trip can be done in under 4 hours.

Amsterdam-London Eurostar tickets are available from £35/€40 (Standard) or £79/€99.50 (Standard Premier) each way and can be booked at the NS International site.

If you also prefer travel by ship between the Netherlands and the UK then there is also the possibility of the Stena Line service from Hoek van Holland to Harwich. Both ports are accessible from Amsterdam and London by rail.

It is recommended to overnight in London before taking the next part of the trip.

[2] From London it’s possible to purchase a Sail Rail ticket to Dublin. From London Euston take a morning Avanti West Coast train up to Holyhead in Anglesey (North Wales), a journey of just less than 4 hours. Sometimes a change in Crewe is required.

At Holyhead you can take an afternoon ferry (choice of Irish Ferries or Stena Line, takes 3 hours 15 minutes) across to Dublin Ferryport, arriving in the early evening.

A bus or taxi can take you from Ferryport to Dublin city centre.

Coming back the other way, there are 2 morning sailings from Dublin Ferryport which arrive in Holyhead between 1130 and 1200. Then take a lunchtime train to London Euston which arrive in the early evening.

Under normal conditions it is possible to travel Amsterdam-London and London-Dublin by coach, although it is a very long trip.

BlaBlaBus is a premium coach service which operates a 1-3x daily service between Amsterdam Sloterdijk and London Victoria – prices start at £22/€25 one-way.

The London-Dublin coach trip is usually operated by National Express – however the route is currently suspended until further notice.

In Dublin you can book your hotel with Booking.com here. For a selection of tours and attractions in Dublin book with GetYourGuide here

This article was originally published in 2013 and has continuously been updated. Last update 13 October 2020. 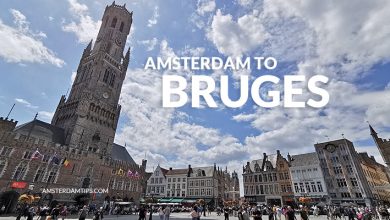 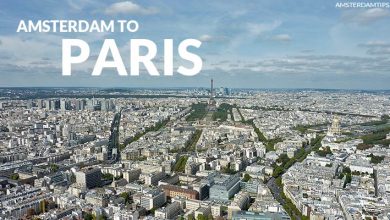 How To Travel Amsterdam to Paris 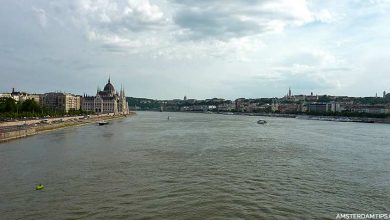 How To Travel Amsterdam to Budapest 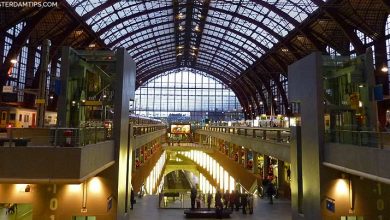