The OBA Oosterdok – Amsterdam’s Central Library – is located in the eastern docklands area (Oosterdok) not far from Central Station. OBA stands for Openbare Bibliotheek Amsterdam, a network of 28 public libraries around the city.


At 28,000m² spread over 10 levels, Amsterdam Central Library is the 2nd largest public library in Europe* and attracts a large number of visitors per year. It is a super place to spend a couple of hours, especially if it’s cold or raining outside – which in Amsterdam happens quite regularly!

The building was designed by noted Dutch architect Jo Coenen and was opened on 7th July 2007, moving from its former location on Amsterdam’s Prinsengracht canal. Over 2017-18 the Central Library also underwent a significant further renovation.

There are about 1,000 seats spread all over the Central Library building, from workplaces with computers to comfy seating on the upper floors.

On the mezzanine level of the ground floor you will find the OBA Café plus the periodicals section. Although mainly Dutch there is a reasonable selection of international newspapers and magazines.

Here is a floor-by-floor summary of Amsterdam Central Library:

There are often free exhibitions and concerts at the library so ask a member of staff what’s going on that day.

The top floor on Level 7 has a café-restaurant Babel and a panoramic terrace with excellent south-facing views of the city. You can also get good views from the windows on Levels 5 and 6.

Toilets can be found at the lowest -1 level, the mezzanine level and 7th floor. There is also a Vapiano restaurant (pasta and pizza) within the building although access is from a separate entrance outside.

WiFi is available for free on your own device although you have to register via a ‘Publicroam’ account. OBA Oosterdok charges non-members €1.20 for 30 minutes internet access at a PC terminal.

How can you join Amsterdam Library? Firstly you need to be a Dutch resident or at least have an address somewhere in the Netherlands. Libraries in the Netherlands generally work on a subscription model and Amsterdam OBA has various membership options:

OBA PC membership costs €17.50 per year and allows up to 3 hours per day for computer use and internet at the Central Library (1 hour at other OBA locations). One can also access the PressReader platform with over 6,000 publications from 100 countries in 60+ languages. No borrowings are included with this option.

OBA Total Membership costs €47.50 per year and allows unlimited borrowings plus PC access as above. Those aged 19-25 pay €27.50 per year.

OBA Junior Membership is free for those aged 0-18 and allows unlimited annual borrowings.

It is possible to join at any of the OBA libraries in Amsterdam. You should bring a form of identification and proof of address. You can also join online (Dutch only) but you would still need to visit a library to activate your membership card.

There is an underground bike parking facility outside the library with space for 1,000 bicycles. If coming by car there is the large Oosterdok Parking garage at Oosterdoksstraat 150 (1011 DK Amsterdam) which has nearly 1,400 parking spots.

In summary if you need a place to read, study, research, relax or just escape the elements, the Amsterdam Central Library is a welcome place to hang-out.

Last updated 8 October 2021. This article was first published in 2008 and has been regularly updated. 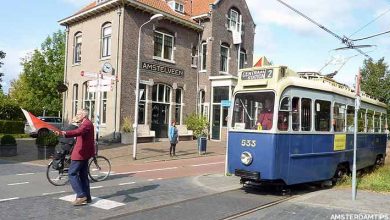 Cheap Things To Do in Amsterdam (Under 10 Euros) 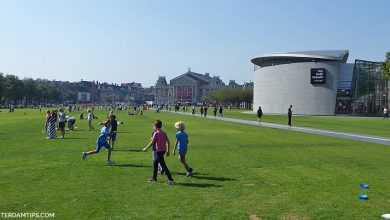 Museums in Amsterdam with Free Entry for Children 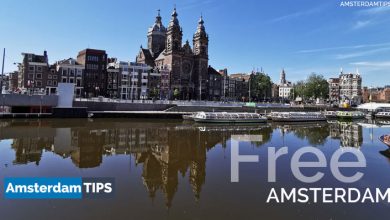 November 11, 2021
Social
About Us
Welcome! Since 2007, AmsterdamTips.com has been bringing up-to-date insider guides to Amsterdam, Netherlands from local experts - helping you to get more from your stay.
Categories
Back to top button
Close